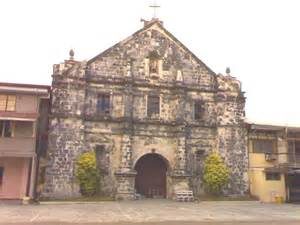 THE ORIGIN OF SANTA CRUZ

At the beginning of the 16th century, in the year 1612, the town of Sigayan, now Santa Cruz, was found in the sitio of Tambobong, which is now within the jurisdiction of the municipality of Dasol, Pangasinan.

It is said that when the first Spanish missionaries arrived at the sitio, they asked the natives the name of the place, but that the latter, thinking that the strangers were asking for the name of the shells that were found in abundance on the seashore, answered “sigayan”. Hence, the name.

The Catholics of the town later built a church which was placed under the leadership of Fr. Alonso de San Agustin. One day, many years later, a negrito by the name of Ytahat killed the priest whose sermon on the church’s pulpit was mistaken for insults directed at the natives.

This incident forced the founders of the town to transfer the townsite to another place, the sitio of “Salaza” which is now the jurisdiction of the Barrio Bolitoc, perhaps because they feared further depredations by the savage negritoes.

This new town was named “Alinsaoag” found at the beginning of the 18th century, whose ruins can still be seen up to the present. The townsite remained in this place until the latter part of the 18th century when it was abandoned by the natives becasue of the overflowing of the Bayto River which brought death and destruction to the inhabitants. The natives had to move to another townsite, the present location of the municipality.

Years later, the people of this town found the image of St. Michael the Archangel, from among the debris carried by the floodwaters of the Bayto River years back. They, forthwith, placed a cross on the spot where they found the holy image on which they built the present church and named the town SANTA CRUZ.